Two out of three kids look like their dad 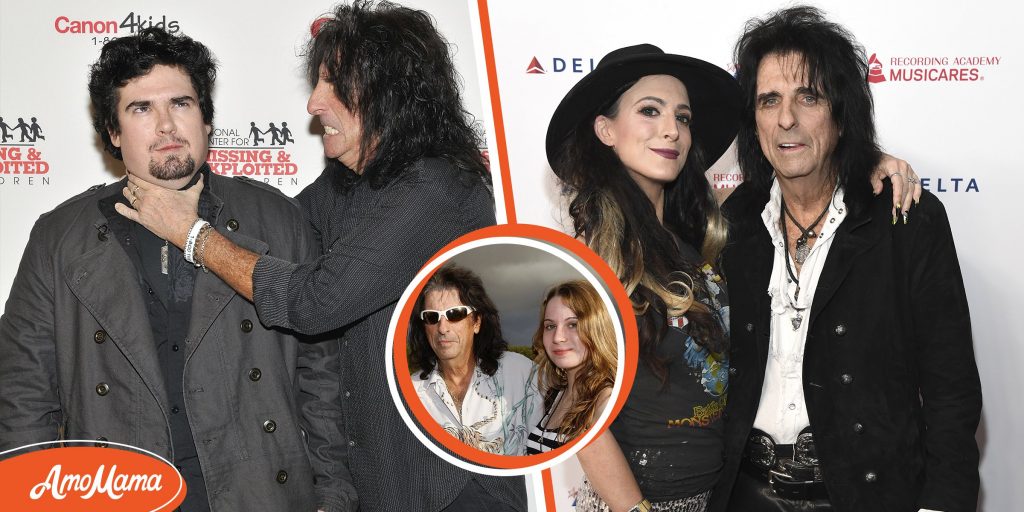 Alice Cooper’s children have always been incredibly proud of their famous father, widely regarded as one of the most influential figures in rock music. Two of the three children of the legend have dedicated themselves to music as a career.

Alice Cooper rose to fame as a multi-million selling shock rocker. Throughout his 40-plus-year career, he pioneered horror-centric rock music. He also made a fortune off garage rock, metal, and punk songs like “Welcome to My Nightmare,” “School’s Out,” and “No More Mr. Nice Guy.”

The rock star has an equally shocking detail about himself. In addition to his horror-themed music, Alice, real name Vincent Damon Furnier, is a born-again Christian, the son of a pastor, and a happily married man with three loving children: Calico, Dashiell, and Sonora Cooper.

Alice Cooper and his wife, Sheryl Goddard, their children Calico, Dash, and Sonora Cooper, as well as the children’s grandmother, Ella Furnier, on the Hollywood Walk of Fame on December 2, 2003, in Hollywood, California. | Source: Getty Images

Calico is the eldest daughter of Alice and her wife Sherly Goddard, born on May 19, 1981. Calico is a multi-talented woman who can sing, act, and direct shows. She is also a dancer who choreographed her father’s stage performance of her song “Brutal Planet”.

The multi-hyphenate appeared on various television shows such as “The Mindy Project,” “Hawaii: Five 0,” and “Henry Danger” on Nickelodeon. She is also the lead vocalist for the rock band Beasto Blanco.

Although he has a successful music career, Calico revealed in a 2020 Ultimate Classic Rock interview that he never intended to do it in the first place and never considered the possibility of being able to make a living in that field. She explained:

“Because that would mean another box of…you know, am I really going to be compared to my dad for the rest of my life?”

On the other hand, Calico believed that he was born to make music. Because of this, Beasto Blanco released his first album in 2013, aptly named “Live Fast Die Loud,” which featured a cover of Alice’s hit song “Feed My Frankenstein.”

In October 2015, Calico married actor Jed Williams in Maui, Hawaii, and the couple’s closest family and friends were witnesses. She was wearing a gorgeous ivory lace wedding dress.

The lovely couple and their guests documented their photos and videos on Instagram with the hashtag “#jedandcalico2015.” Calico shared a snapshot of her and her bridesmaids raising a toast to mark the special day.

On the other hand, Jed expressed happiness for his new milestone. He even posted an Instagram photo of himself hugging Calico with a sweet caption in which he recognized Calico as his wife and described the occasion as “the best wedding party ever.”

The beautiful, sunny wedding was far from something Calico had grown up with. When she was a child, she used to run around her father’s intricate horror-themed stages, which weren’t exactly kid-friendly.

Although attending his father’s horror-themed shows may have been scary for some, Calico said joining his father’s events was a common family affair. He remembered his father teaching soccer and then performing at sold-out concerts. She commented:

“I think that says a lot about him as a human being, rather than as an actor because he was one of those guys who was like, ‘I refuse to believe I can’t have both.’

Like her mother, Sheryl, a dancer and choreographer, Calico quickly became a part of her father’s stage performances. Calico finally put her creativity and talent to use after years of practice.

Calico and Alice spent three nights opening for the legendary rock band Rolling Stones in 2006, following their performance at the Brutal Planet show in 2001. Sharing the stage with Rolling Stone was memorable for the father-daughter pair.

She recalled how “intense” it was for her father to meet and open for the band he had long admired. The multi-talented personality even had a photo of them with the iconic group pinned to her fridge.

Even though she was born to famous parents and has two famous brothers, Sonora seemed uninterested in fame.

Calico reflected on her years on stage and was grateful for her memorable experiences as a performer, particularly the long nights on the bus tour. She credited her busy schedule with instilling structure and responsibility in her.

Born June 3, 1985 in Phoenix, Arizona, Dashiell, also known as Dash, is the second son of Alice and Sheryl. Dashiell is a happily married man raising three children with his wife, Morgan Cooper. He plays and writes songs for the rock band CO-OP.

Like Calico, Dashiell strives not to depend on his father’s success and emphasizes that he has been trying to build his name in the music industry on his own. He believed that he and his older sister were talented enough to do it independently.

However, he admitted that they appreciate their father’s influence and direction. He went on to say that Alice occasionally collaborates with them. Dashiell said that playing with his father are special moments that they wouldn’t trade for anything.

Born in 1992, Sonora is the youngest daughter of Alice Cooper and Sheryl Goddard in the family. Even though she was born to famous parents and has two famous brothers, Ella Sonora seemed uninterested in fame.

Sonora and her husband, Diego Díaz, have chosen to live far from the spotlight. While older brothers Calico and Dashiell pursued careers in show business, details about her younger sister’s activities were unknown.

Although Sonora and her husband have chosen to live a more private life, she seems to maintain a close bond with her siblings, especially her parents.

In 2020, Alice revealed that Sonora was expecting a child. However, the iconic rocker did not provide any additional information in public as her youngest daughter decided to keep it confidential.