Wife Buys Easter Egg at Flea Market with Last $50, Husband Scolds Her until He Accidentally Opens It — Story of the Day 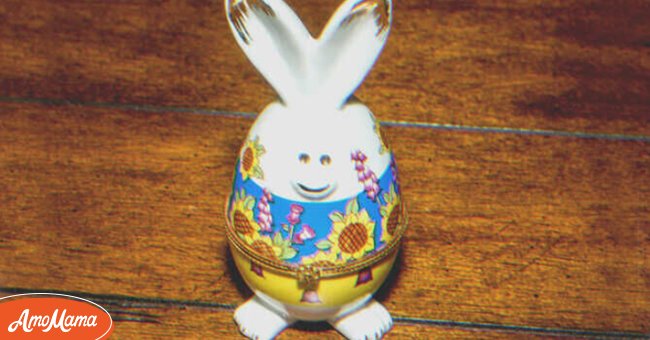 A husband lashes out at his wife for spending their last $50 on a “quirky” Easter egg at a flea market until he unintentionally opens it and discovers something shocking inside.

Rory and George Austin were both orphans who married young and lived a wonderful life with their twin daughters and three boys until their home was destroyed by fire, and they were forced to live in a trailer.

Rory and George were both blue-collar workers, and they worked hard to make ends meet. But regardless of their financial situation, they nurtured their children with affection and never made them feel as though they would miss out on something because they weren’t so well off.

Sure, they didn’t have grand and lavish birthday parties or exotic beach vacations, but they did enjoy modest family picnics or campfires every weekend, Rory’s freshly baked cakes and cookies for birthday celebrations, and new outfits she would skillfully stitch on her sewing machine .

Once, months before Easter, Rory and George planned to organize a big Easter celebration for the kids. They had begun saving for it pretty early, but unfortunately, things didn’t go as planned, and in the end, all they had was $50 in their savings.

To save on expenses, Rory decided to go shopping for decorations at a flea market, where she hoped to find a handmade wreath, cute, painted plastic eggs, a basket, and fragrant candles for much less than they cost in a regular store.

However, while browsing through the flea market, a quirky Easter egg caught her attention. It was fashioned like a bunny with a strange comical smile and had a stunning sunflower and lavender décor printed on it. Rory had no idea what came over her, but she couldn’t stop herself from purchasing it, so she approached the seller.

“How much for the egg?” she asked. The old man selling it handed it to her and she turned it in her hand, swiftly running her eyes over it to verify it wasn’t damaged.

“That’s a wonderful choice, ma’am!” the seller smiled. “I would have sold it for $70, but I’ll give you a special Easter discount and make it $50!”

Rory and George were excited for the upcoming Easter. | Source: Pexels

“$50?!” gasped Rory. “That’s far too much! Oh, I’m sure you could cut it a little,” she said sweetly, hoping to persuade the merchant. But it was all in vain.

“$50 is the final price, ma’am. You either take it, or someone else gets the good fortune of owning it,” he declared confidently.

Rory was in a fix. She wanted that egg so bad. She pulled out $50 and bought it. When she got home and George discovered she’d spent their last $50 on one egg, her rage knew no bounds.

“Oh, George, come on! I know it looks crazy, but look at the bunny. It’s hilarious! I’m sure the kids would love it!”

“Funny my foot, Rory! You know we’d been saving for this Easter for so long! How could you even—” George was so furious that he snatched the egg from Rory’s hand to throw it on the floor. But suddenly, he heard something — a clinking sound coming from within. When I examined the egg again, I realized that its rabbit stomach had shifted slightly.

“It has something inside,” George stated, twisting the upper half of the egg and causing it to click open.

Inside, Rory and George discovered a pendant – a gleaming piece that appeared to be made of diamond.

“A pendant?” Rory wondered. “It looks lovely. Someone must have left it inside.”

“Who gives a damn?” George laughed. “It appears to be a genuine diamond! I need to get it appraised!”

“Shut up, George,” Rory snatched the pendant from his grasp. “I don’t care if it’s a diamond or not; I’m returning it to the dealer who sold it to me! I don’t want to live off someone else’s money.”

“Are you serious? We can move out of this crappy van into a better house! It looks like a real diamond, Rory!”

With that, Rory returned to the flea market in search of the man who sold her the egg, but he wasn’t there. She asked a few sellers if they knew when he’d be back, but no one knew anything. Rory thought she would never see him again, but then an elderly woman with a little booth in one corner approached her.

Rory went back to the flea market in search of the egg’s seller. | Source: Pexels

“He’s not coming back,” she said. “You should go to his hometown of him. His name of him is Alfred, he left after he sold everything.”

“He’s been wanting to go home, but he didn’t have enough money. I saw you buying that old egg from him. That was one of the last things he sold. Wait, I have his address. He used to be my neighbor , but I later moved to another house.”

Rory thanked the woman for her help and went back home. She needed money to travel to Alfred’s hometown, but she did not have any of her, so she had to ask George for it. “Hey, George. We have something left in last month’s emergency fund, right? Remember we said we’d use it in case of an emergency. I guess we can use that money and return the pendant.”

“And what makes you think I’d back you up on that? I told you to sell that necklace, but you didn’t listen. Then why should I listen to you?” I have snarled.

Rory and George had an argument about returning the necklace. | Source: Unsplash

“That’s because our decision as elders matters for our children, George.” She took her hands in hers and patiently explained. “Do you want our children to see us as people who take advantage of others? We should give it back for our children’s sake and set a good example for them, George. Listen, Easter is just around the corner and I’m sure God had some plans for us to do something good, which is why we came across this egg. Can we please go to his hometown?”

Having calmed down a little and realizing he wasn’t right, George agreed to Rory’s request.

That Saturday, when they visited Alfred in his hometown to return the pendant, he couldn’t contain his tears.

“You came here all this way for this? Oh, thank you – thank you! This pendant isn’t like any other, by the way. It’s a real diamond pendant, and it’s very special for me.” He opened the pendant and showed them a photograph inside. “You see this? That’s my wife and daughter. I lost them both years ago in a car crash.”

“Oh, there’s no need for that. Come on in. Let me make you some tea. And we can have some cookies as well. Okay, children?” Alfred smiled brightly at George and Rory’s kids.

Alfred was beyond grateful to get the pendant back. | Source: Pexels

As Alfred brought them tea, George made the old man an offer. “Well, sir,” he said. “I hope you don’t mind if we ask you to join us for Easter celebrations this year. My wife and I are both orphans, and our children have never had grandparents.”

Alfred spent Easter with Rory and George that year, and to this date, the pair considers it the best Easter they’d ever had. Perhaps it was the feeling that they had done the right thing, which is why having Alfred with them made them feel better.

From then on, Rory and George paid Alfred visits during their children’s summer vacations and the youngsters began to affectionately refer to him as Grandpa Alfred.

Years went by like that until one day when Alfred left for his heavenly home. George and Rory handled his burial arrangements and buried the pendant with him.

A few days after the funeral, Alfred’s lawyer sent them an envelope. Inside, they found a letter written by Alfred along with a set of documents.

In exchange for Rory and George’s kindness in returning the pendant, Alfred left them a special present. | Source: Pexels

Thank you for brightening my life when this elderly man had no will to live. I shall be eternally grateful for what you have done for me. So I decided to repay your kindness by leaving you a small gift inside the envelope. They are my house’s property paperwork. I hope this helps you and that you and your children have a better life.

If you enjoyed this story, you might like this one about a little boy who cries all alone at home until a homeless man sneaks inside his house.