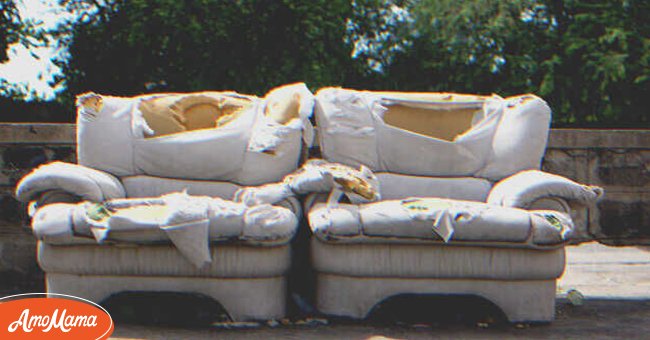 A poor woman browsing a flea market is disheartened to realize that all she can afford is a pair of broken armchairs. She eventually buys them anyway, but while cleaning them at home, she discovers an envelope inside one of them that changes her life forever.

Scarlett Childs and her husband Travis were both orphans who fell in love while they were teenagers and got married right after they left the orphanage. A year later, they welcomed two beautiful daughters – a set of twins – and that’s when things started getting tough for them.

Unfortunately, their financial life wasn’t as smooth as their romantic life, and they made a meager income per month after combining the money Travis earned from repairing old furniture and Scarlett’s earnings as a seamstress. And after welcoming two babies, they hardly had anything left by the month’s end.

That’s why when Scarlett saw their bed was in bad shape, she had to drive to a flea market to get a replacement. But when she saw the prices of the old beds, she realized they were completely out of her price range. That’s when her gaze from her was drawn to two broken old armchairs in a corner.

She checked their prices, and they were just what she could afford. She knew it wouldn’t serve the purpose of a bed, but when joined, at least one person could sleep peacefully on them. So she approached the vendor and purchased the pair before anyone else did.

She brought them home with Travis’ help, and while cleaning them at home, she felt something tucked beneath one of the cushions. When she lifted it up, she discovered an envelope underneath it.

“Who could have left it here?” she wondered, turning it around in her hand several times. It looked pretty old and the paper had begun to peel off at the corners. She planned to open it after she finished cleaning the chairs, but curiosity got the better of her.

Scarlett found a letter under one of the cushions. | Source: Pexels

She flipped the envelope’s flap and Inside was a letter in cursive writing that, according to the date on the upper right corner, was penned 53 years ago.

“To whoever finds this,

My name is Maggie Wilson, and I am so happy you bought those armchairs. Sadly, by the time you read this letter, I’ll most probably be in heaven, far away from the world of humans. Honestly, I wanted to leave the world sooner, but God didn’t have plans for it until 3 months ago when I found out I had cancer.

At this point in my life, I have nothing else to lose. My son and husband died long ago in a fire that had engulfed our house. After that, I lived alone, and I’m delighted I’ll be reunited with my son and husband soon. But first, I’d like to fulfill a wish, and I’m hoping you can assist me. That’s why I left the envelope in the armchair. These armchairs are the only thing left of that tragic day. They are a painful reminder of what happened, but at the same time, I can’t bring myself to get rid of them.

You will find an address at the end of the letter. Go there and look under the elm. It will not disappoint you.

The letter instructed to look under an elm tree. | Source: Pexels

Scarlett examined the letter, and there was, indeed, an address in the bottom corner. The place was not far from her house, although it was a half-hour journey away. She called Travis right away and told him about the letter, and the two resolved to find out what was located there.

They asked their neighbor to look after their children while they were away, and an hour later, thanks to the traffic for eating away the extra half-hour, they discovered they were in a deserted neighborhood where an old, but enormously abandoned Victorian-style mansion stood. There was also a large “For Sale” sign in the garden, but based on its deserted state, Travis and Scarlett assumed it hadn’t been seen a visitor in years.

Fortunately, the main gate leading to the mansion was open, and one could walk to the backyard without having to go through the house which had a huge lock on its front door. So they strolled to the back of the house and discovered the old elm tree. It stood tall, its leaves dry and shriveled as a result of negligence. Travis searched for something they could use to dig and found a shovel in the greenhouse.

Little by little, he began digging, and suddenly he heard a clink! Something had been buried there, most likely something made of a metal that clinked when hit with the shovel. I kept digging for a few more minutes until an old tin box emerged. It had a lock on the front latch, and when Travis forced it open with the shovel, he discovered something wrapped in a sheet of paper.

Peter began digging the ground to discover what was hidden underneath the elm tree. | Source: Pexels

When he took it in his hands, it felt heavy, so he tore the paper open and froze in awe when he found several gold biscuits inside.

“Travis!” cried Scarlett, struggling to take in what they’d just discovered. “Oh my goodness! Is this all real gold?”

“Ummm…I suppose so. I mean, they look real to me. I think they are. That’s probably what the lady meant when she claimed we wouldn’t be disappointed. After all—”

“Wait,” Scarlett remarked as she scooped up the bits of wrapping paper. “It’s a letter. The sheet of paper that was wrapped around them.”

Travis and Scarlett gathered the scraps of paper and discovered it was another letter from Maggie.

“True wealth is family, not money, because money is nothing when you lose a family. Since I didn’t have an heir, I decided to leave the money in God’s hands to be found by someone who needed it the most. If you “re reading this, I believe God eventually found the rightful owner. These biscuits are made of real gold, and they would fetch you nothing less than millions. Good luck!”

Scarlett and Travis couldn’t believe their luck. The day that began with Scarlett looking for an old bed ended with them becoming millionaires!

That night at home, after much contemplation, they decided to sell the biscuits and move to a new, more comfortable house. But first, they wanted to visit Maggie’s grave and thank her for the life-changing gift she’d given them.

After combing through all of the town’s cemeteries, it took another two weeks, but they did find her. It turns out that her entire family of hers was buried in the same cemetery.

Travis and Scarlett decided to pay them all a visit, and they’ve been doing that ever since. Later, they also moved to a bigger house, but Maggie’s armchair still sits in their living room as a memory of how she assisted them in disguise when they were in need. Travis restored it in such a way that it’s hard to tell they’re the same chairs Maggie brought back from the flea market.

If you enjoyed this story, you might like this one about an 84-year-old mom who teaches a savage lesson to her children after announcing she is moving to a nursing home.