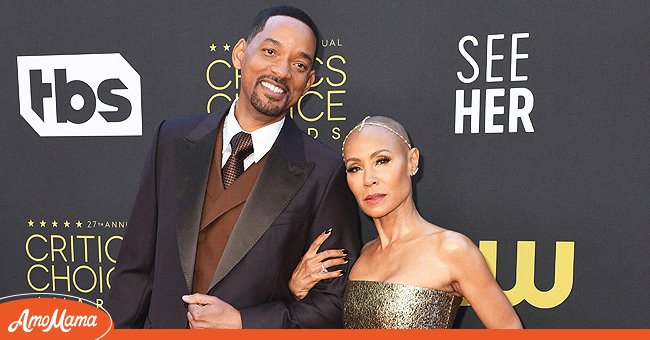 Will and Jada Pinkett-Smith’s relationship flew into the eye of the storm after he assaulted Chris Rock at the Oscars, but things have been far from perfect for years.

There may be many power couples in Hollywood, but only a few are as influential as Will Smith and Jada Pinkett-Smith. They have been married since 1997 and share a son, Jaden, and a daughter, Willow.

Unfortunately, people started digging deep into Will and Jada’s romance following his controversial reaction at the 2022 Academy Awards ceremony. They even found a clip of Ella’s Will asking his wife not to use him on her social media.

Jada Pinkett-Smith and Will Smith in Los Angeles, on March 13, 2022 | Source: Getty Images

Jada Pinkett-Smith, Will Smith, and Chris Rock made international news at the 2022 Oscars after Rock made a joke about Jada’s bald head. In response, Will slapped Rock in front of the cameras and the audience.

When the “Focus” star returned to his seat, he yelled at Rock and demanded to stop talking about Jada. It is essential to point out that Jada has been candid about her struggles with alopecia since December 2021.

Shortly after the incident, sources claimed Jada was not angry with her husband. Still, she supposedly wished he didn’t slap Rock, and the couple allegedly agreed that Will overreacted.

Netizens got busy following the Oscar scandal and found old videos of Jada and Will that apparently prove their relationship is rather unhealthy. In 2018, Jada admitted on “Red Table Talk” that she didn’t want to marry Will.

The “Bad Moms” actress confessed she cried while walking down the aisle and only accepted to marry the “Bad Boys” star because she was expecting their eldest kid, Jaden. Jada said:

“I was under so much pressure. Being a young actress, being young and pregnant. I didn’t know what to do, but I knew I never wanted to be married.”

Although shocking, it was not the only resurfaced video that seemingly proves Will and Jada Pinkett-Smith’s relationship is not as healthy as it seems.

During a 2019 Instagram Live, Jada promoted an episode of “Red Table Talk” by asking Will if her guest, therapist Esther Perel, was instrumental in their process of redefining their relationship.

Will looked upset and told Jada not to film him without asking him. Instead of listening to her husband’s request from her, she told her viewers she was still “dealing with foolishness” and repeated the question. Will had enough and answered:

During his appearance on “Red Table Talk,” Will also revealed that Jada cursed him in front of 20 people (including his eldest son, Trey) while playing Pictionary. In response, I wrapped a newspaper and hit Jada on the head.

They talked about it and agreed never to use profanity to communicate with each other again. Will Smith and Jada Pinkett-Smith have been married for almost three decades and have weathered storms along the way.