Dying Woman Writes and Hides Letter to Her Husband and His New Wife, He Gets It Two Years Later 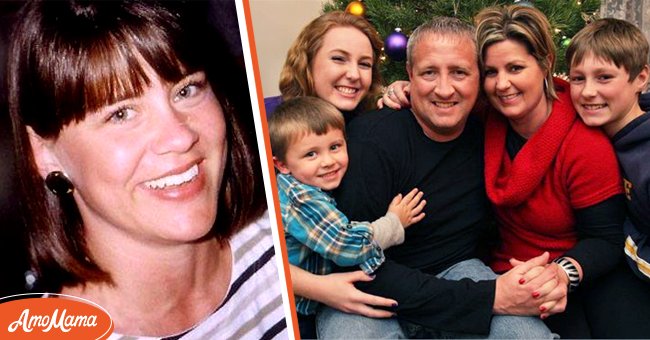 Mothers will do anything to take care of their families, and one woman’s creative idea allowed her to connect with loved ones from beyond the grave.

In the United States alone, tens of thousands of women are diagnosed with ovarian cancer each year, and sadly a large percentage of them die due to the illness.

When a 46-year-old mom received a devastating cancer diagnosis, she wrote her family a surprise letter.

SHE HAD STAGE FOUR CANCER

Brenda Schmitz was a happy mother of four when she was handed news that rewrote all of the dreams she had for herself and her family. She had tied the knot in 2007 and started a life with David Schmitz.

Brenda had one son named Carter, 21, from a previous relationship, while David had two of his own kids, Josh, 17, and Justin, 14. Together, the couple also welcomed one son, Max, 4.

The blended family was shocked when they learned about Brenda’s stage four ovarian cancer. Brenda was heartbroken that she wouldn’t see her kids grow up. She desperately wanted a way to stay connected to them.

One month before her passing, a severely ill Brenda devised a creative plan that would mean the world to her loved ones a few years later.

She was too weak to hold a pen, but she could type, so the mother formulated a letter for her family. However, she hid it from them and handed the precious words to a friend.

Brenda gave her friend a list of essential instructions—the letter was to be kept from the Schmitz family until the time was right.

In 2013, two years after her passing, Brenda’s husband received an unexpected call from the team at STAR 102.5 in Des Moines, Iowa. Those calling were part of the crew of a Christmas Wish program.

A STORY THEY HAD NEVER HEARD BEFORE

KSTZ “Star” 102.5 FM’s brand manager, Scott Allen, was in tears after he read the letter their team received in the mail.

They instantly knew they needed to contact the involved parties because the story was unlike anything they had ever heard before. Allen invited David to their studio, and the father had no idea what was about to unfold.

In a video that has been viewed over four million times, David Schmitz spoke about his late wife with emotion and care. Listeners were touched by the love he had for her.

When the team told him about her letter, he was speechless. He said:

“My mind was going every which way and couldn’t fathom that the letter exists. It was quite incredible.”

SHE HAD THREE WISHES

As radio host Colleen Kelly started to read Brenda’s words, David was overcome with emotion. Brenda’s words of her revealed her reason for writing the letter and she outlined three wishes.

The first wish was for a time of pampering for David’s fiancee, Jayne Abraham. She wrote:

“Make her smile and know her efforts are truly appreciated from me. Thank you — I love you — whoever you are.”

Brenda’s second wish was a magical trip for her family. She wanted them to have fun and enjoy life.

“Somewhere where they all can enjoy their company and companionship as a family and create those memories that will be with them forever.”

SHE THANKED THE UNSUNG HEROES

Lastly, the mother thanked the medical staff at Mercy Medical Center. Her final wish of her was dedicated to them.

“A night out full of drinks, food, and fun for all they do everyday for the cancer patients they encounter.”

SHE ENCOURAGED HER HUSBAND’S NEW WIFE

Brenda also wrote a special letter for her husband’s new wife. The contents remained private, but Abraham, who had two children, Madison, 15, and Sam, 13, shared a few details. She revealed that it was a “mom-to-mom letter” that encouraged her.

It helped remove any concerns she had about her relationship with David. Abraham stated:

“There were times when it was questionable, and I personally struggled a little bit because I wasn’t sure that it was the right time [for the relationship].”

However, Brenda’s words eased her mind and helped her move forward with David.

THE BEST PART OF HER LETTER

While the encouragement and kind words meant a lot to Abraham, one aspect of the letter meant the most to her.

Holding back tears, Abraham expressed that Brenda said she loved her unconditionally. Abraham added: “That’s what was so amazing. She didn’t even know who I was going to be.”

SHE IS WATCHING OVER THEM

David, his new partner, and their shared kids formed one happy blended family, and they were convinced that Brenda watched over them. They felt her presence of her and saw signs of her everywhere.

The emotional dad recalled how a double rainbow appeared when Brenda passed away, even though they had not had rain for five weeks.

Brenda and her son, Max, always sang the song “Over the rainbow,” and David knew it was a sign of her continued presence in their lives.

THE STORY IS NOT OVER YET

While David does not know which friend was responsible for keeping Brenda’s letters, he thinks there might be more in the future. His wife cared about the little details, and he would not be surprised if she had more letters hidden away from her.

“I just don’t think the story is over. I’m prepared now. Let’s put it that way.”

HER WISHES WERE FULFILLED

Brenda would be thrilled to see how the team at STAR 102.5 fulfilled her wishes. They secured sponsorships and granted the family an all-expenses-paid trip to Disney World, Florida.

Abraham received her spa and pampering time, and the staff at Mercy Medical Center were also treated to three food drop-offs provided by a catering company.

Brenda’s selfless actions touched many people worldwide. Users revealed that the video of her husband de ella left them in tears. A netizen expressed: “I’m bawling my eyes out. I’m utterly mind blown by this.”

Many people also recounted their journeys with cancer. One commenter wrote: “I recently lost my mother due to cancer, and my uncle is losing his fight. So I can relate. So thank you for sharing.”

Brenda’s story was one of a kind and tugged on our heartstrings. Click here for another story that will have you looking for your tissues. A mom with stage four kidney cancer wrote her daughter de ella a series of beautiful letters that encouraged her to live boldly.