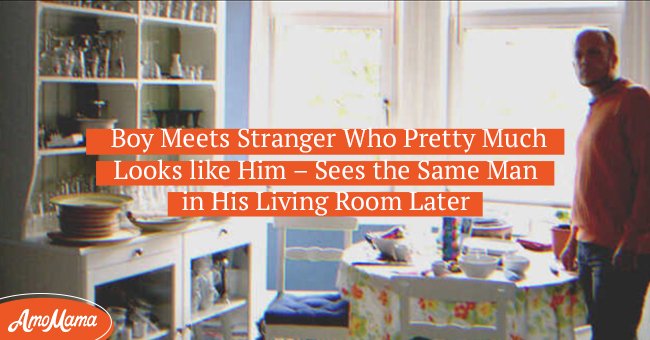 A 17-year-old boy was working at a local cinema when he met a friendly stranger who asked him what movies he liked. Later that day, he saw the same man standing in his house when he returned from work.

Seeing the stranger in his house standing right next to his mother shocked him. He had never seen the man before and had no idea what he was doing in his home.

The boy wrote a detailed Reddit post in the “relationship_advice” forum, explaining who the man was and what happened at his house that night.

Before narrating the main story, the boy shared that he lost his father when he was 8, and his mother never remarried or got into a serious relationship after that.

He always felt a void in his life that only his father could fill. He never told his mother about it, but he thought it would have been better if his mother had married again. He badly needed a father figure.

He appreciated his mother’s efforts in raising him, but he confessed there were times when he needed a father. I have missed him a lot.

The boy lost his father when he was 8. | Source: Unsplash

One day, while standing at the concession counter at the cinema where he worked, he noticed a stranger standing near the counter and allowing other people to cut in the queue before him.

He thought the man must be letting other people go ahead of him out of generosity, but that wasn’t the case. After the boy finished entertaining all the customers, the man came closer and chatted with him.

He worked at a local cinema. | Source: Unsplash

The boy sensed the man’s nervousness while talking to him, but he didn’t know why he felt that way. The man asked him for food and movie recommendations before buying a ticket.

After handing the ticket to him, the boy noticed that the man had disappeared. Like other customers, he forgot about the man until he reached home.

As he entered the house, he noticed his mother had a visitor. He was shocked to see the man from the cinema sitting in their living room talking to his mother about him.

He headed back home after his shift was over. | Source: Unsplash

Confused, he asked his mother who he was. He heard her voice tremble as she told him that he did not need to worry because the man was leaving.

The boy was confused seeing his mother’s reaction and wondered why she was behaving so strangely. When she asked the man to leave, the man refused.

“I’m not leaving until you tell him the truth,” he said, folding his arms on his chest.

“Tell me what?” the boy asked his mother from him.

He saw the same man in his living room. | Source: Unsplash

The boy’s eyes widened after hearing those words. He looked at his mother de ella in disbelief, expecting her to explain what the man had just said.

“He’s lying! Your biological father died years ago,” she exclaimed. “Remember how he cared for you? He was your real father!”

“Is he telling the truth, Mom?” I have asked. Tears trickled down her mother’s cheeks as she frowned and covered her face with her hands. He looked at the man and realized he resembled him.

His mother cried when he asked him if the man was his father. | Source: Unsplash

The man revealed he wasn’t aware he had a son, or he would have contacted him earlier. He swore that he was his birth father, but the boy was still confused.

He asked his mother if the man was telling the truth. He suspected he was her ex of her trying to harm her, but his mother of her assured him that it was n’t the case.

After wiping her tears, she asked him to sit down so she could explain her side of the story. But he refused, picked up his car keys from her, and drove her to his friend’s place.

He drove to his friend’s house. | Source: Unsplash

“I feel so betrayed by my mom. How could she not tell me the truth?” I have stated. The boy felt his mother from him should have told him the truth because he was old enough to know it.

He confessed that he didn’t know what to say to his mother and the man. He wrote the Reddit post to share his story with others and seek advice.

“I think you should hear your mom out whenever you decide to go back home,” Redditor Additional_Savings72 advised, adding his mother might have her reasons for hiding the truth from him.

I have posted his story on Reddit to seek advice from others. | Source: Pexels

The Redditor also asked the boy to take his time and decide what he wanted to do next, pointing out that his father might try to come back into his life, so he needs to decide if he wants to have a relationship with him.

“I really want to believe she has a good reason for not telling me. And I want a relationship with my dad,” the boy replied.

“I hope you and your dad make up for the lost time,” Revolutionary_Bid_87 wrote to which the boy said he hoped the same but was afraid that he had ruined his first impression by crying in front of the man.

Most Redditors wanted OP to talk to his parents and reconnect with his father. They believed his mother must have had her reasons for hiding the truth from him.

The boy confessed he wanted to have a relationship with his father. | Source: Unsplash

Why did his mother hide the truth from him?

It’s not clear why the boy’s mother denied his biological father a relationship with him or why she hid the truth from her son. There could be several possible reasons she chose to conceal the truth, and many would like to believe hers was valid. What do you think?

What would you do if you were OP?

Most people suggested that OP go back to his house and listen to what his mother had to say. They also wanted him to hear his father’s side of the story. If you were OP, what would you do after learning you had a biological father you didn’t know about?

If you enjoyed reading this story, you might like this one about a woman who took a DNA test and learned that the man who raised him was not her biological father.

All images are for illustration purposes only. Share your story with us; maybe it will change someone’s life. If you would like to share your story, please send it to info@amomama.com.