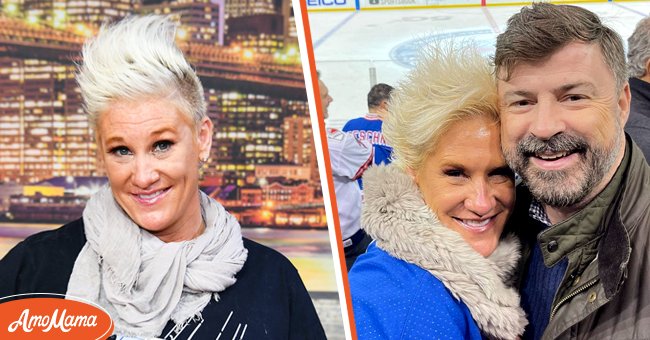 Love came in the most unlikely ways for celebrity Chef, Cookbook Author, and Food Network star Anne Burrell. After a failed engagement with a woman, she found love in the arms of a man at age 49 and had her dream wedding.

What seems like a fairytale between “Worst Cooks in America” ​​host Anne Burrell and her husband, Stuart Claxton, began a few years ago, after a broken engagement.

In 2012, Ted Allen, Burrell’s fellow Food Network star, revealed that she was a lesbian. This surprised a few people who knew very little about her private life.

Burrell’s reps confirmed that she had been dating a woman, a fellow chef named Koren Grieveson, for some years, adding that it was no news to people in the culinary world. At the time, the women were engaged and lived together.

While speaking about how she manages her workspace, Burrell mentioned that she loves privacy when cooking, and even her fiancée, Grieveson, was not welcome in her kitchen.

Unfortunately, the couple split, and Burrell was on a quest to find love again. She registered on a dating site, Bumble, where she met her next fiancé and her husband.

While recounting the experience, Burrell stated that she and Claxton clicked almost immediately. Claxton had no idea she was a celebrity chef. She seemed thrilled with his oblivion of her, adding that “it kind of helped.”

On their first date, Claxton was signed by his lover’s appearance. He told Today that she looked more impressive in person than in photos. Burrell also found her date of her exciting, and they decided to stick to each other ever since.

Chef Anne Burrell poses at a book signing during the Grand Tasting presented by ShopRite featuring Culinary Demonstrations at The IKEA Kitchen presented by Capital One at Pier 94 on October 13, 2019 in New York City. | Getty Images

When he popped the life-changing question, Claxton and Burrell were quarantined in their hometown, Cazenovia, New York. First, Claxton got a wedding ring but felt it appropriate to run his decision by Burrell’s mom. So he asked her for her blessings before enlisting her help for her proposal.

His future mother-in-law owned a townhouse and a magnificent apartment where they decorated, setting up a beautiful table and an atmosphere suitable for a lovers’ date night.

The pair kept their meticulous arrangement a secret without informing Burrell. Eventually, Claxton invited his beloved partner to the dinner date. At the event, the couple was surrounded by family.

At the dinner table, Claxton continuously talked about the past and future of their relationship, including songs they could play at their wedding. This seemed ridiculous to his lover, who felt the conversation was inappropriate considering the setting—they were in the midst of her family.

Still, this did not determine Claxton. Instead, he switched to talking about family and later went down on one knee to propose. In response, an excited Burrell answered with a resounding “yes!”

Anne Burrell and husband Stuart Claxton at the Sony Pictures Classics & The Cinema Society special screening of “Julia” at One Vanderbilt on November 10, 2021 in New York City. | Source: Getty Images

Although the cookbook author confessed they were a perfect match from the start, and she knew that the relationship was real, Burrell never envisioned being married.

This was because she had never shared wedding vows with anyone, and Burrell had given up her hopes of having a fairytale wedding, considering her age.

So even though she found love with her ex-fiancée, the TV host did not consider marriage; instead, she was thrilled about building a successful career.

A few months after the surprise proposal, Burrell and her spouse planned their “magical fairy tale” ceremony to honor the most memorable day of their lives.

The couple wedded at Windridge Estates Redbarn 20 in Cazenovia. It was a fantastic event that featured the inclusion of family and friends.

Burrell, who was the most beautiful woman in the room, wore a Caroline Herrera wedding gown. She approached the aisle in a horse and carriage and was followed by her four bridesmaids to the altar.

While Burrell’s bridesmaids, including her sister and close pals, dressed in burnt orange “classic fifties-style party dresses,” her husband opted for his teenage son, Javier, to be his best man.

Claxton, who is no stranger to weddings, and has children from a former marriage, looked handsome in his Ralph Lauren-designed tuxedo and Nike high-tops. The celebrity chef mentioned that she wanted the wedding style to be “fun and have a sense of whimsy.”

Only the best meals were served at Burrell’s wedding ceremony. It took months to perfect the menu, and it included a vegan menu, pasta dish, and plates of tasty short ribs.

Following the wedding, the new bride became a stepmother to her husband’s only son, Javier. The trio has an excellent relationship and spends quality time together.

ANNE BURRELL SPENT HER HONEYMOON IN HER RENOVATED HOME

Despite all the excitement of being a first-time bride, Burrell decided not to go ahead with a traditional honeymoon.

After their wedding and after-party, the newlyweds moved into their refurbished Brooklyn apartment. The cookbook author admitted that she would rather be loved up at home than spend her honeymoon in a foreign place.

Fans would agree that their Brooklyn home provides the peace and comfort any private couple can get. It includes a great kitchen space with the proper fittings, equipment, and cabinet colors.

Burrell’s apartment also possesses a concise living room, dining tables and chairs facing the TV, a place for fresh flowers, and large windows that give a beautiful view of the skyline. And it was at this abode that the lovebirds spent their unconventional honeymoon.

Even though settling into marriage as a newcomer could be overwhelming, the couple has managed their affair impressively. Despite her love for privacy, Burrell has no worries about celebrating her husband online.

For this year’s Valentine’s Day, Burrell treated fans to an adorable wedding photo of her and Claxton. She also added a heart-melting caption.

Anne Burrell at a screening of “RX: Early Detection A Cancer Journey With Sandra Lee” during the 2018 Tribeca Film Festiva at SVA Theater on April 26, 2018 in New York City. | Source: Getty Images

The Food Network star is enjoying every bit of marriage. Even when there is no peculiar celebration, she often shares photos of her de ella and Claxton having fun.

Indeed, life as a married woman and a stepmother is soothing, and Burrell, who once rated her career above marriage, could not have asked for a better partner and love story at 52!