After Dad’s Death, Man Learns a Note Was Found near His Body – Mother Hid This Fact for 19 Years 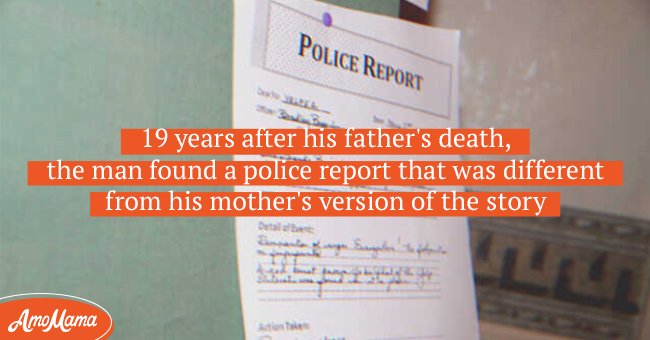 While unboxing cartons, the man found stacks of papers in an old box. He checked them and soon unraveled a long-hidden truth about the circumstances that led to his dad’s death from him 19 years ago.

Redditor supertaquito found himself dealing with suspense when the details of a mysterious note penned by his late father came to light 19 years after his death.

The 30-year-old man couldn’t decipher what prompted his mom to keep him in the dark about his dad’s final letter. He has to find the missing piece to the bigger picture but he was worried about the consequences.

The Original Poster (OP) was 11 years old when his parents were in the process of divorcing. OP’s mom moved out with OP and his two sisters, and they stayed with a family friend for months.

One day, OP noticed his mom was extremely stressed, but the heartbreaking reason was unfolded the next day. The news revealed that OP’s dad was no more, and reports claimed he’d met with an accident on his way to a medical checkup.

The loss was excruciating, and shortly after, their relationship with the dad’s family deteriorated. Since they lived a block away, OP’s mom believed the family often broke into their house. Her allegations of her kept piling up for months, and it did n’t make any sense to OP.

OP’s mom was crushed after his dad met with an accident & died. | Source: Pexels

Over the next ten months, the mom relocated to another state with her children. A few years later, OP’s sisters received emails from their dad’s family. They claimed their mom had lied to them about their dad’s death.

OP and his sisters thought it was odd, particularly after their dad’s family constantly stressed that he’d died because of “family problems.” But when the children asked their mother, she shrugged it off and convinced them that their dad’s family was being “crazy.”

Every time the dad’s family reached out and tried convincing the children that their mom was keeping them in the dark about their dad’s death, nobody believed. With such confusion prevailing, OP moved out of the house. He took plenty of boxes with books, but he didn’t know that one of these cartons had a long-hidden truth stowed in it.

Years later, OP moved out of his house & took plenty of cartons along. | Source: Pexels

Since OP moved into a smaller house, he didn’t have the time to go through the contents of the boxes until five years later, when he moved into his own home. He finally unpacked the boxes and was shocked to find that one of them had stacks of papers and documents.

He rummaged through the contents and found three documents that made him suspicious. First was a legal filing from his mom de ella against his dad de ella, mentioning “domestic conflict” as the reason that led her to file for a divorce.

Then OP found his father’s death certificate, autopsy reports, and a police investigation document that detailed his father’s death with pictures. OP felt something was shady with whatever his mom had claimed earlier and kept looking for more details.

While unboxing the cartons, OP found documents that revealed details of his dad’s death. | Source: Pexels

The documents further revealed that his dad didn’t meet an accident outside the clinic but was found dead on a freeway ditch. The police report suggested that it was uncertain why his father crossed the freeway that did not have any pedestrian crossing.

The report further revealed that his dad had carried a “handwritten note,” but nothing more was elaborated about what was written.

Having read this, OP instantly recalled one of the emails in which his uncle (dad’s brother) had mentioned the letter was his father’s “dying note.” This note was given to his mother de ella, along with several other documents, after she insisted all records be given to her.

The Redditor was confused after the truth dawned on him. He could n’t believe his father was involved in a domestic conflict with his mother, considering the incredible times he had with him. Furthermore, he was hurt knowing his mom had been telling him lies about his father’s death for years.

OP’s instincts prompted him to discuss his findings with her, but he was muddled about proceeding, mainly because he knew his mother would shrug it off as nothing.

So OP decided to contact his father’s family and probe into the mystery. However, I doubted if he had proceeded in the right direction. Posting his narrative on Reddit’s “Relationship Advice” sub, he asked random strangers for an outside perspective.

OP was upset & confused about discussing his findings with his mother. | Source: Pexels

The post’s top-voted commenter, QuitaQuites, guessed that OP’s mom could’ve tried to protect him from the dark side of her marriage with his late dad and their domestic conflicts that sparked divorce.

“First, tell her what you found and what you know… better or worse, I’m going to guess your mom thought she was protecting you from her psychological state,” the Redditor asserted.

Meanwhile, user cheleb107 advised OP to discuss his findings with his sister if he was confused about getting his mom involved, adding:

“Tell her that you’re old enough to know the truth now, and if she doesn’t come clean, you’re just going to assume the worst.”

People on Reddit surmised OP’s mom could’ve tried to protect him from her dark past with his father. | Source: Pexels

Conclusively, OP stated that he was in a clueless position to predict how his confrontation and investigation of his father’s death would affect his relationship with his mom if she found out.

However, he was certain his mom might not confess anything even if he asked her for a reasonable explanation for concealing the truth and his dad’s handwritten dying note from the family.

“I don’t know how to feel about my father, and even if I admit it takes points away to learn about this, I also don’t want my mom to shrug it off,” OP proclaimed.

In the end, OP hoped his mom wouldn’t shrug off the truth if he confronted her. | Source: Pexels

Do you think it’s acceptable when parents conceal certain truths from their children that could affect their relationship when found out later?

For 19 years, OP believed his mother’s version of the story of his father’s death. After the truth unfolded through the documents, OP wanted to find out more from his dad’s family but he hesitated, thinking it would affect his relationship with his mom. Would you confront your parents/relatives if you were to unravel a life-changing truth about a deceased loved one that contradicted their claims?

Do you think OP’s relationship with his mother would be negatively impacted if he recovered his father’s final letter?

In one of their emails, OP’s uncle and aunt claimed that the handwritten note mentioned in the police report was his father’s final letter before he died. They also assumed it was with his mother since she requested custody of everything recovered from the scene. Although the note’s contents remain a mystery, it’s guesswork how deeply it would affect OP’s relationship with his mother if he recovers it someday.

If you liked reading this story, here’s one about how a woman discovered her dead husband’s double life and hired a private investigator to find out more about him.

The National Suicide Prevention Lifeline is 1-800-273-8255. Other international suicide helplines can be found at befrienders.org.